On June 27, 2017 workshops took place at the POLON ALFA factory in Bydgoszcz, the theme of which was the prevention of terrorist threats with the use of weapons of mass destruction. The event was divided into three parts – a conference with local and international visitors representing CBRNE key institutions and bodies involved in CBRNE hazards, workshops and an episode taking into account the interactions of the various services facing the CBRNE crisis- a “Dirty bomb”.

Representatives of the PIAP Institute, at the invitation of the Border Guard poste in Bydgoszcz presented IBIS®, PIAP GRYF® and TRM® robots. Participants of the workshop after a short instruction had the possibility to control the robots themselves.

During the episode, PIAP robots were used to identify the location of the incident, investigate the contamination of the site, take and carry the dangerous object, collaborate with additional equipment (X-ray), communicate with the injured and observe the site. 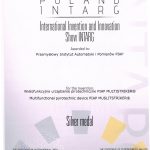 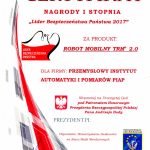