Logos Imaging LLC (USA) and Łukasiewicz PIAP (Poland) have joined their development efforts in integrating the X-ray inspection capability on a reconnaissance & EOD robot, the task successfully proven with a 800 meter remote operation of the ensemble.

Having recognized the integration as the key to the mutual success, the American manufacturer of portable X-ray systems – Colorado based Logos Imaging LLC – teamed up with Łukasiewicz – PIAP Institute, the Polish manufacturer of C-IED and CBRN recon robots, to present a unique solution of total operation of the robot and the X-ray system from the robot operating console.

One of the examples of how great the integration is in real life, was the test performed earlier this month just outside Warsaw, Poland, in the scenic Vistula river surroundings. The robot drove as far as 800 meters from the operator, who was able to fully control the device with the peripherals from the single console, as well as to take an X-ray image of a suspiciously-looking box, without having to change from the console to a separate PC to operate the DR system.

The operation has been filmed from an UAV, and the footage is available at Łukasiewicz PIAP YouTube channel:

The task has been carried out by PIAP PATROL®, a medium (95 kg) tracked robot used for detection and neutralization of potentially lethal objects. The robot can replace or assist people in the most dangerous tasks with countering IEDs or CBRN threats.

The robot design enables the assembly and use of several accessories at the same time. The lightweight control panel of a robot fully supports the operating software of Logos Imaging’s portable X-ray systems, as well as CBRN sensors. Its dimensions and drive system allow to carry out activities both inside buildings and in difficult field conditions. The compact and modular design of the robot allows it to be transported even in a passenger car.

Using a manipulator with 6 degrees of freedom and the gripping function of the gripper jaws, it is possible to pick up loads up to 22 kg, from up to 800 meters away in open area. The manipulator has the reach of 2 meters, with a wide range of motion in each plane, allowing the operator to safely position the X-ray system in order to inspect the object from virtually any possible angle.

The X-ray system used for the task is Logos Imaging’s popular 16-bit MONOS DR panel coupled with an XRS-3 generator, both connected to a robot-integrated MIKRÓS interface board. This solution allows to also use the most recent systems of the American supplier – the glass-free STENÓS and XIRÓS panels.

The two partnering companies believe, that their joint efforts will be beneficial to countering the IED and CBRN threats worldwide 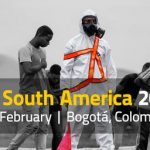 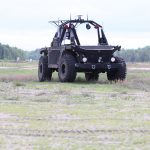